Look, I know the Republicans are having wet dreams about stealing Pennsylvania away from the Democrats, but it just ain’t gonna happen.

I was never a believer that this state would remain competitive in the first place. There’s just too much anecdotal evidence, too many disaffected friends and co-workers who only voted Republican last time because, in the words of one, “Al Gore was a wimp.” Folks around here are socially moderate (pro-choice/anti-partial birth/anti-gay bashing) and fiscally conservative (as if that label means anything nowadays). And they are, by and large, appalled by the incompetence and extremism they’ve seen from the White House.

Supporting my expectation of a Kerry win is the fact that Pennsylvania elected the liberal mayor from Philadelphia as its governor in 2002. Ed Rendell won in a landslide, taking all the major counties except for those “Alabama parts” in the middle of the state. Al Gore won comfortably in 2000 even with Tom Ridge in charge of the state machinery. 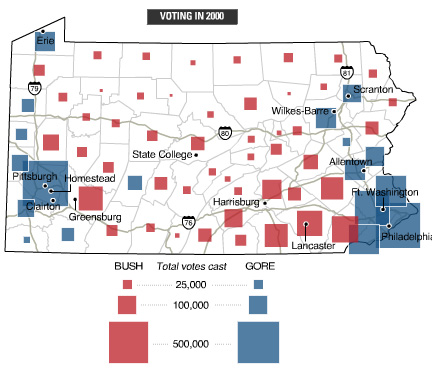 I live in West Chester, which is about 35 miles southwest of Philadelphia. The Philadelphia suburbs are, for the thousanth time, crucial to any party that hopes to win a state-wide race. Yes, it’s a college town, but the student population can be better described as apathetic slackers than thinking liberals. Besides, I live far from the student section of town; my block is filled with families and only two apartment houses.

Yet today I counted seven Kerry/Edwards yard signs on my block alone, and none for Bush/Cheney. (A neighbor even asked me if I had an extra “Anyone But Bush” bumper sticker a few months ago.) On the next block up, it was split at four apiece for Bush and Kerry. And on my drive to work, which, on that particular day, I decided would wind through various neighborhoods in a bid to put off work, I saw three times as many Kerry/Edwards signs as I did Bush/Cheney.

(My co-worker and I decided on a whim to steal four or five Bush/Cheney yard signs during our lunch break today, so that should widen the gap a little more.)

Anyway, it’s amusing to watch national Republican officials on cable TV, talking about how they still have a shot. They sent President Bush here just last week to visit Downingtown, that conservative little “nowhere” town 10 minutes up the road where my friends and I sometimes go to catch a movie. Both towns are a part of traditionally conservative Chester County, which has been growing more moderate over the years as Philadelphians like myself move out of the city.

Maybe if they’d had a gay marriage referrendum on the ballot, like in Ohio, then things would be closer. Without that, Bush might pick up a few votes in this area based on his emphasis on the L-word, but that’s about it. I’ve been looking, and I just don’t see the fervor or the conservative turnout necessary to overcome the reflexively Democratic vote coming out of Philly and Pittsburgh. Maybe Bush’s pollsters know something I don’t, but from where I stand, I just can’t see Bush punching through here.

This entry was posted in Politics. Bookmark the permalink.