Morality and the “Yuk” Factor

Oh yes, another test. A pretty good one, too.

Your Moralising Quotient is: 0.04.

Your Interference Factor is: 0.00.

Your Universalising Factor is: 0.00.

“You see very little wrong in the actions depicted in these scenarios. You don’t think that an act can be morally wrong if it is entirely private and no one (not even the person doing the act) is harmed by it.” 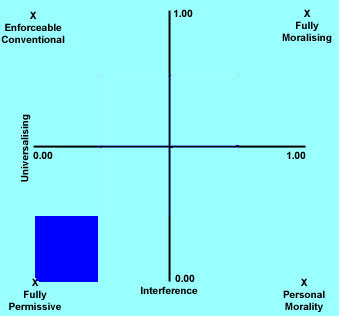 The “taboo” situations in the test are cleverly designed to be the most extreme ones that do not involve direct provable harm (breaking deathbed promises, adult incest, eating household animals after they die, screwing dead farm animals). That is, the test identifies the extent to which readers can discern between their own distaste for an action and legitimate moral judgement of that action based on its effects on others.

Here’s a good litmus test I use to determine whether my feelings against something should be translated into actual beliefs: Can I explain, logically, why I feel it’s wrong?

Those who answer by stating “It just IS” are usually allowing their revulsion to take the place of logic. I tend to view such people as ignorant, insecure, non-thinking and generally devolved.

Also note that the score does not mean one is “liberal” or generally permissive on issues that are moral matters. I consider myself quite conservative on those.

Check out the test…

This entry was posted in Profiles. Bookmark the permalink.

10 Responses to Morality and the “Yuk” Factor