Shocking and depressing news today, with the word that Elliott Smith is dead. 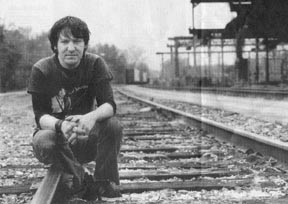 I first heard Elliott Smith’s music in 1997, when a friend dragged me to a performance in Philly. It was the first concert I’d ever attended. He’s alright, I told her, but my opinion changed once I got home and downloaded a few tracks off Napster. Not only did I eventually buy all his CDs, but I’ve been listening to him ever since. In fact, I’ve been anxiously searching Amazon for signs of a new album (his last was in 2000).

It’s unusual, the way Smith died, brutally stabbing himself in the heart. It indicates a pretty strong feeling of self-loathing/hatred, or perhaps that he was just lovesick. I think there’s more to that story to be revealed later.

But assuming he did, in fact, kill himself, then I have no sympathy. I’m disappointed, sure, but I also feel no inclination to attend sobfests for people who choose death when they have the resources to get help.

Still, though, I will miss Elliott Smith’s angelic voice. An industry full of pop acts and boy bands has truly lost one of its brighter stars.

This entry was posted in Music. Bookmark the permalink.