About 95% of the way through I Stand Alone, the movie stops. The screen flashes red and states “WARNING: You have 30 seconds to leave this screening.”

I didn’t stop the movie. I kept watching. That’s why I no longer find the film’s cover unsettling.

You see, the scene depicted on the movie cover happens even later in the film, after the part viewers are warned about. And when the cover scene finally occurs, the viewer wants it to happen, realizing that it is, in fact, the only measure of mercy to be afforded by the filmmakers, and the last opportunity to ease the viewer’s own freshly scarred conscience.

The suicide scene is the best part of this movie.

And with that, here is the philosophy of life as espoused by the main character:

A life is like a tunnel. And to each his own little tunnel. But at the end of the tunnel, there’s not even light. Yep. Nothing. Even memory goes before the end. Old folks know that. A little life, a little savings, a little retirement. And then a little grave. And all of it for nothing.

It’s all useless. Even children. When you’re old and poor your kids will throw you in a nursing home to croak alone, in silence. Children don’t care. Filial love doesn’t exist. It’s a myth. 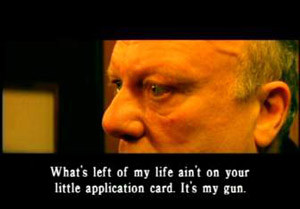 Your mother, you love her as long as she gives you milk. And your father when he lends you money. But when her breasts are all dried up, or when your father’s pockets are all empty, the best thing to do is lock them up and let them die before they cost you too much. 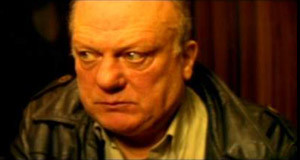 That’s how it goes, the law of life. Children pretend to be nice only when there’s an inheritance. But then the inheritance is a fridge or a TV set, it’s not even worth pretending. Strictly the necessary, enough to buy a good conscience.

Phone once a month, shed a few tears when they die and your duty is done. Love, friendship, it’s all bullshit. Juvenile illusions to hide the fact that human relations are nothing but cheap business.

Friendship and love suits us, but in a calculating way. Reality is much more venal. You love your mother because she feeds you and stops you from dying. Your friend because he gets you a job that feeds you and stops you from dying. And your fat old lady because she cooks, empties your balls, and gives you kids to care for you when you’re old and afraid of dying.

But slap your kid just once and he’ll take revenge when you’re old. In fact, that slap is exactly what he wants. When he throws you in a rest home, it’ll be his excuse to mask the natural disinterest that we all feel toward our sires.

No. That baby they want to trap me with, I don’t like him. And I know he’ll feel the same.

I Stand Alone bills itself as a film about morality, and it is, in the sense that the film is devoid of any. Its credo: Vivre est un acte egoiste. Living is a selfish act. Survival is a genetic law. Life is, in sum, a series of choices that all boil down to fulfilling either one’s own desires or someone else’s.

What a dark, nihilistic movie. I never thought that I, of all people, would say this about a film: Do yourself a favor, and don’t see it.

This entry was posted in Movies/TV. Bookmark the permalink.