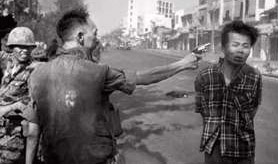 I just watched Hardball, and they displayed pictures of Uday and Qusay Hussein’s dead bodies no fewer than six times.

First, let me say this: I believe the military made a wise decision in releasing the photos. After all, the Iraqi people having been terorrized by this family for over two decades, and many of them still live in constant fear of reprisals from tyrants in hiding. In this case, as well as with Saddam, presenting proof of their demise is essential to calm the populace and encourage Iraqis to look to the future.

I feel differently, however, about the American media’s decision to broadcast the photos, particularly in the fashion they were shone on Hardball. Most Americans, after all, are not so suspicious and paranoid that they distrust the DNA, dental and visual verification already performed by the U.S. military.

Here’s my problem: These stations didn’t display these gruesome photos because Americans needed to see them, but rather, simply because they could, and because every other station was doing it. The display came with nary a warning, I might add, at least on the show I watched.

It is rather telling that the same media that sheilded us from Iraqi casualties during the war are now eagerly displaying such grisly photos of dead, pale, blood-splattered faces. Appropriate, too, that such a casual display would occur on a show like Hardball, set to the soundtrack of the usual partisan rancor between talking heads.

We have turned 180 degrees from Vietnam, when images from press informed us, in somber fashion, of the full gravity of war. Then, those images revealed the depth of human sacrifice on the battlefield. Today, they are shown to entertain us.

Today’s media, it seems, are less interested in informing the American people than they are in scandal-mongering, propaganda-peddling and whoring for ratings. The casual and repeated display of these photos was ugly and callous; it was we’ve-got-the-goods journalism at its worst. It underscores the unfortunate nature of the contemporary news media, and will serve as a milestone in the gradual coursening of American culture.

This entry was posted in Media. Bookmark the permalink.